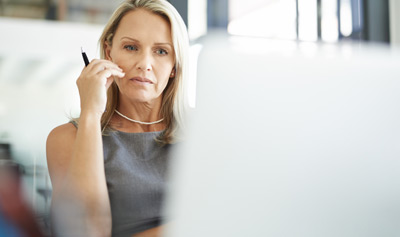 Have you ever lied on your resume? You’ll be surprised to know that a whopping 85 percent of employers have caught applicants fibbing on resumes. People often stretch the truth on resumes in a desperate attempt to land work. However, honesty really is the best policy. You should never lie when applying for a job. You risk damaging your reputation, getting passed over for job offers, getting fired, or even getting sued for fraud if your lies are revealed while employed. Thanks to the Internet, it’s easier than ever for hiring managers to spot fictitious resumes. Here are resume lies employers can see right through.

One of the most common fibs on resumes is employment dates.

About 25 percent of employees have lied about their job tenure. Employment dates that don’t add up are highly suspect and a recruiter can quickly figure out your lie by making a quick call to your past employer to find out that you worked there for only two months, not two years.

Employers are also suspicious of resumes that list job history by year rather than month and year. It will only prompt HR managers to conduct further with scrutiny.

Resumes with ambiguous descriptions such as “familiar with” or “involved in” may be signs of trying to downplay a lack of experience.

Hiring managers who find questionable information on a resume will probably ask detailed questions about a candidate’s work experience. They will assess the candidate based on the depth and quality of the response. A less than stellar answer usually means that the person is lying.

Because skill stretching on resumes is prevalent, many employers today ask candidates to demonstrate their talent on the spot.

A candidate who fails such a basic test is proven to have either stretched the truth or puffed up their abilities, both of which are guaranteed to take you out of the running for a job.

When a job seeker’s resume and cover letter don’t match, that is a red flag to employers that a candidate is not being entirely honest.

An error-free, flawlessly written resume paired with a muddled cover letter raises suspicion- it could suggest that you got help with your C.V. or perhaps even taken another person’s work history to pass off as your own.

A candidate unable to recall key details of their past job experience during an interview is another sign they have lied about their past employment.

Many employers look at a candidate’s resume and LinkedIn profile before an interview. If they notice something is off- like let’s say, your resume indicated you have a degree while your LinkedIn profile doesn’t- it could raise some questions.

Consistency is key. It’s important to match dates and basic facts on your resume to your website and social media profiles.

If a job title seems too good to be true, it most likely is.

Unless you’re Mark Zuckerberg, hiring managers would be leery of a twenty-three-year-old in C-suite.

Never inflate your job title! A prospective employer could call your ex-boss to confirm your title(s) during your time there.

You shouldn’t exaggerate your job responsibilities either. An employer might ask you questions regarding specific job-related processes and it will become apparent when you can’t answer the questions.

Lying about your degree or education is the biggest deal breaker for most employees.

Don’t even think about fibbing, even if you attended the school but are only one semester short from graduating.

Technology has made it easy and cost-effective for potential employers to check on a candidate’s educational background either by calling the school directly or using a degree and enrollment verification service, such as Qualification Check and the National Student Clearinghouse.

A third party, such as a co-worker, mutual friend, or family members, can also clue an employer into a lie.

I know someone who falsely listed employment at a company his employer’s wife used to work at during his supposed time of tenure. Bob* (not his real name) was asked questions for names of other managers and co-workers there. He couldn’t respond. When the employer informed him that his wife worked for the company, Bob* finally came clean. Obviously, he didn’t get the job.

Recruiters know that speaking to a candidate’s references results in hearing only good things since they’ve been coached to say the positives and evade the negatives.

If you give fake job references and the recruiter becomes suspicious, he or she might conduct a backdoor reference to verify the information.

They might use LinkedIn, look at your social media profile and connections, Google searches, contact alumni groups, and even conduct a face-to-face meeting with an acquaintance to gain secondary information about an individual. Once a recruiter finds out a candidate has lied, it marks the person as a “Do Not Hire”.

In the end, lying on your resume is bound to make things more troublesome. Resume padding no longer remains unnoticed by most employers. Not only is it unethical but you also risk damaging your professional reputation. Don’t be tempted to exaggerate your credentials. Lying on your resume isn’t worth it.

Become a member to take advantage of more features, like commenting and voting.